Very soon, those of us that enjoy collecting our venison with bow and arrow will once again be taking to the deer woods. Bow hunting in Texas today is far different than it was when I first decided to accept the challenge a quarter century ago. Back then, with the archery equipment available, it was necessary to spend months in preparation for the fall hunting seasons.

Today’s compound bows are much more forgiving and easier to master. I have a good friend that will be hunting elk with me up in Colorado’s high country about the time you read this. Until a couple months ago, he had never even picked up a bow. After a little basic shooting instructions, he was soon shooting two inch groups at 20 yards. After a month of diligent practice, he could keep his arrows in the kill zone out to 40 yards. He’s ready to hunt and his confidence level is through the roof.

About seven years ago, crossbows became legal during the Texas archery whitetail season and the passing of this regulation brought even more hunters into the sport of hunting deer with archery tackle. Learning to shoot a crossbow accurately is even easier than mastering the compound bow. Many companies that manufacture compound bows have now jumped on the crossbow bandwagon. Darton Archery, long known for smooth, accurate compound bows, now offers 5 models of crossbows including what is possibly the most powerful crossbow on the market, the Fire Force which shoots an astounding 400 feet per second and delivers just over 142 pounds of kinetic energy. I regularly shoot my scoped Fire Force out to sixty yards and when shooting from a solid rest, groups are almost as tight as I can achieve with a rifle. Under hunting situations, though I limit shots to 40 yards.

If you have been contemplating hunting with archery tackle, there’s still time for you this season but its crunch time and you need to purchase that bow and begin practicing immediately. I have a little 3D target range set up in the trees close to my house and have found that shooting life size deer targets is the very best practice for hunting season. It’s one thing to practice shooting at a dot on a square target but much more beneficial to shoot 3D targets that closely mimic the game animal that you will be hunting. When I first began shooting and hunting with bows, I remember shooting a 3D whitetail buck targets on an almost daily basic from early spring until the opener of bow season. On my second hunt, an old seven point walked out of the brush and stood broadside at 21 yards. I placed the twenty-yard pin on the back of his shoulder and nudged the release. The buck went 52 yards and was down for keeps. I am positive that all the practice with the 3D target was a huge help. Take the time to learn proper arrow placement and all angles that occur in the real world of bow hunting. Standing, broadside shots are my favorite but possibly slightly quartering away shots are even better. I pass on shots when the deer is quartering at more than a few degrees; there’s just too much room for error. Wounding does occur, regardless which hunting tool one chooses to use. I’m extremely picky in my choices of shots and after 25 years of hunting with my bows and many deer on the meat pole, I have lost only two and these were because of marginal hits when I simply lost the blood trail.

The biggest challenge for the newcomer to bow hunting is the waiting game necessary to make a clean kill. Through the years, I’ve had to pass on many deer at very close range simply because they did not present a high percentage shot opportunity. I’ve developed a little game when practicing that has helped me immensely in actual hunting situations. Rather than shoot at targets from known distances, say 20, 30 and 40 yards, I practice from different angles and distances. When hunting from a tree stand, it’s very common to shoot a bit higher than when shooting from ground level. Try to make your practice sessions closely duplicate what you expect to encounter when hunting.
Today’s compound bows shoot much flatter trajectories that those of a few decades ago. The Darton 3800 model that I practice and hunt with requires only one pin out to 30 yards. Actually, I have my top sight pin, a green one that provides the best visibility in low light conditions, set at 25 yards. On targets out to 30 yards, the bow shoots so flat that my arrows stay within a 2-inch group, regardless the yardage. I have pins set for 40 and 50 yards as well but I have a self imposed distance of 30 yards when shooting game. Regardless one’s skill level, there are many variables to consider when shooting game much over 30 yards. Wind and animal movement are a couple of elements that make longer shots ‘iffy’.

Recovery of game shot with archery tackle takes a completely different mind set from those shot with a rifle. It’s common for an arrow shot deer to run as though it was never hit for a short distance. Most deer run at least 30 yards before going down. On marginal hits, which do occur in the real world of bow hunting, they sometimes run much farther. It’s best to wait at least 30 minutes after shooting deer before leaving your stand and taking up the trail unless, of course you actually see the deer go down. I’ve made the mistake of pursuing deer too quickly after the shot and from past experience can tell you that it can make for a long, frustrating recovery.

There are many fine broad heads on the market today and the choice of whether to use a fixed or mechanical is a personal one. I’ve taken big game with both types but I favor a three bladed mechanical that is made from good steel. With the three blades comes three wound channels, Broad heads kill by hemorrhage and it stands to reason that three blades cuts more tissue than two. I have hunting friends that began shooting fixed blade broad heads years ago and never switched to mechanicals. They continue to “dance with the one that brung them” and put bucks on the meat pole with regularity year after year. Many modern day fixed broad heads fly exactly as practice points but it’s important to never assume that you can screw a fixed blade on and your groups will be the same as with practice points.

Regardless whether you are planning to hunt with a longbow, recurve, compound or crossbow, remember that there is still plenty of time to hone shooting skills. So, after you’ve completed this article, get out there and SHOOT! The opener is just around the corner!

HERE’S SOME TIPS THAT I BELIEVE WILL MAKE YOUR NEXT BOWHUNT MORE SUCCESSFUL:

SHOT PLACEMENT- Harvesting game with a high velocity rifle bullet is far different than using an arrow tipped with a fixed or mechanical broadhead. I wait for slam dunk shots that I know that I can make and pass up ‘iffy’ shots. Broad side or slightly quartering away shots offer the best opportunity of a clean harvest.

FIXED BROADHEAD OR MECHANICAL- I shoot a mechanical broad but there are many, many quality broad heads, both mechanical and fixed, on the market today. A quality mechanical broad head should begin cutting the instant the point strikes the animal and, with good shot placement, harvests game every bit as quickly as a rifle bullet. Regardless which type broad head you choose, make sure and shoot it enough to learn its point of impact at various yardages. My mechanicals fly exactly the same as filed points of the same weight but, I learned that by actually shooting them in practice. Innerloc offers the Carbon Tuner fixed broad head that flies exactly to the same point of impact as field points or mechanicals. The blades of the Carbon Tuner can easily be index to match the alignment of the vanes on the arrow.

LEARNING ‘WHEN TO DRAW’- The act of actually drawing a bow when deer are close is one of the most challenging aspects of bow hunting. Deer are extremely ‘wired’ and are highly sensitive to sight and sound. Movement is necessary to bring a bow to full draw and the challenge is drawing when undetected. I’ve learned to watch the animal’s body language closely and draw only when the animal is looking away or has its head down feeding. The Darton 3800 compound bow I shoot offers 80% let off. I have the draw weight set at 60 pounds, but when the cam on the bow breaks over, I’m only holding 12 pounds, something I’ve done on past hunts for a couple of minutes until the deer presented the right shot angle. Truthfully, with the speed of today’s compounds, 55 pounds provides about the same arrow speed as bows of yesteryear pulling close to 70 pounds. My Darton chronographs just over at 300 FPS, set at a very easy to pull 60 pounds. I’m planning on cranking it down to 58 pounds after this upcoming hunt. Remember, it’s one thing to pull heavier draw weights when it’s warm and from a standing position but things are different when setting several hours in a cold trees stand!

TRACKING- Deer often run out of sight after the shot and learning to follow the trail is a major part of successful bow hunting. Unless you actually see or hear the deer go down, it’s a good idea to wait at least 30 minutes before taking up the trail, longer if you know the shot was less than perfect. 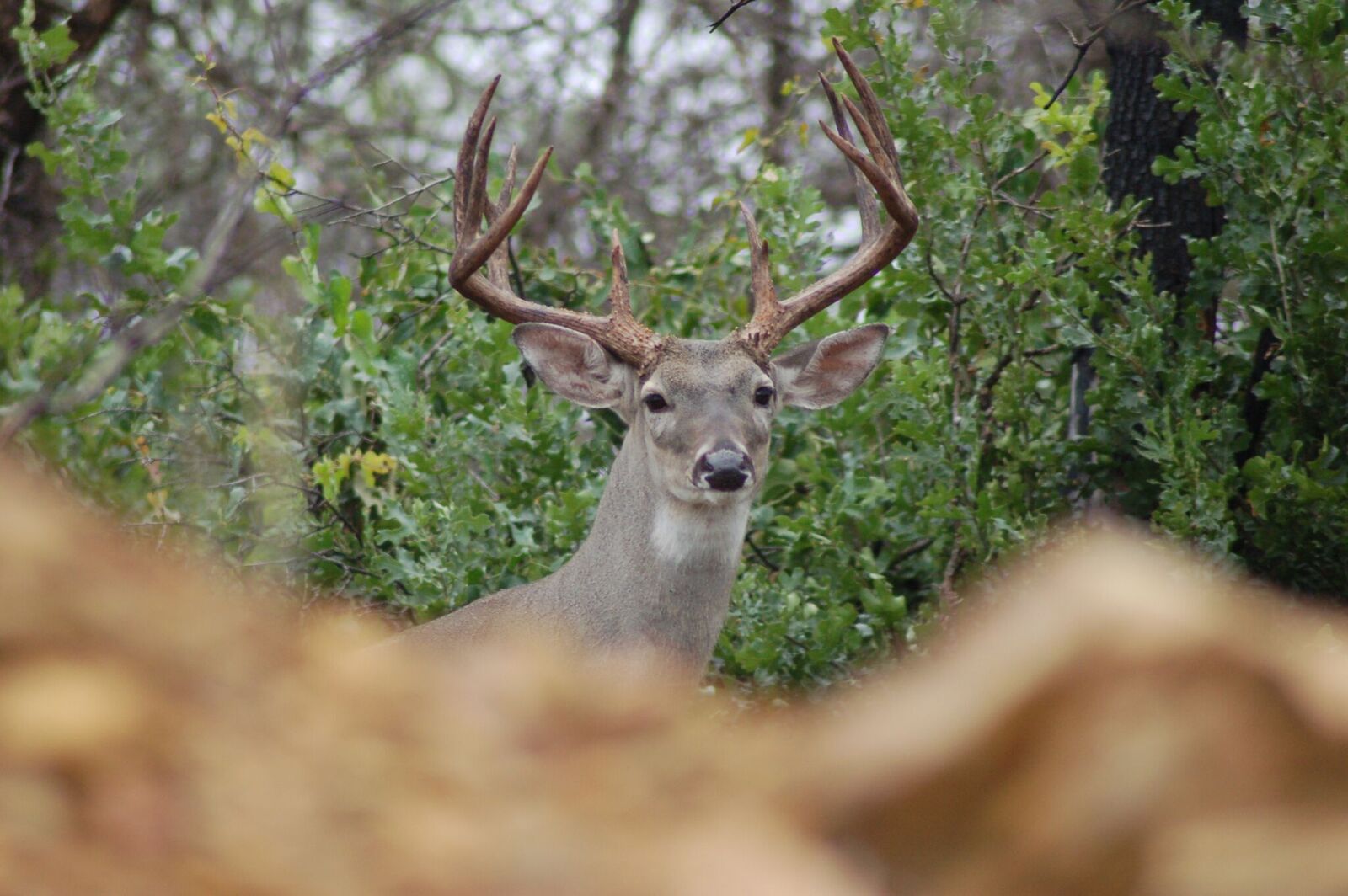 Bow hunters lose sleep about this time every year, anticipating a close encounter with a bruiser buck like this. Photo by Luke Clayton

Luke Clayton Buck – This might not be the highest scoring buck the author has arrowed but he was most definitely one of the most challenging to close the distance with. 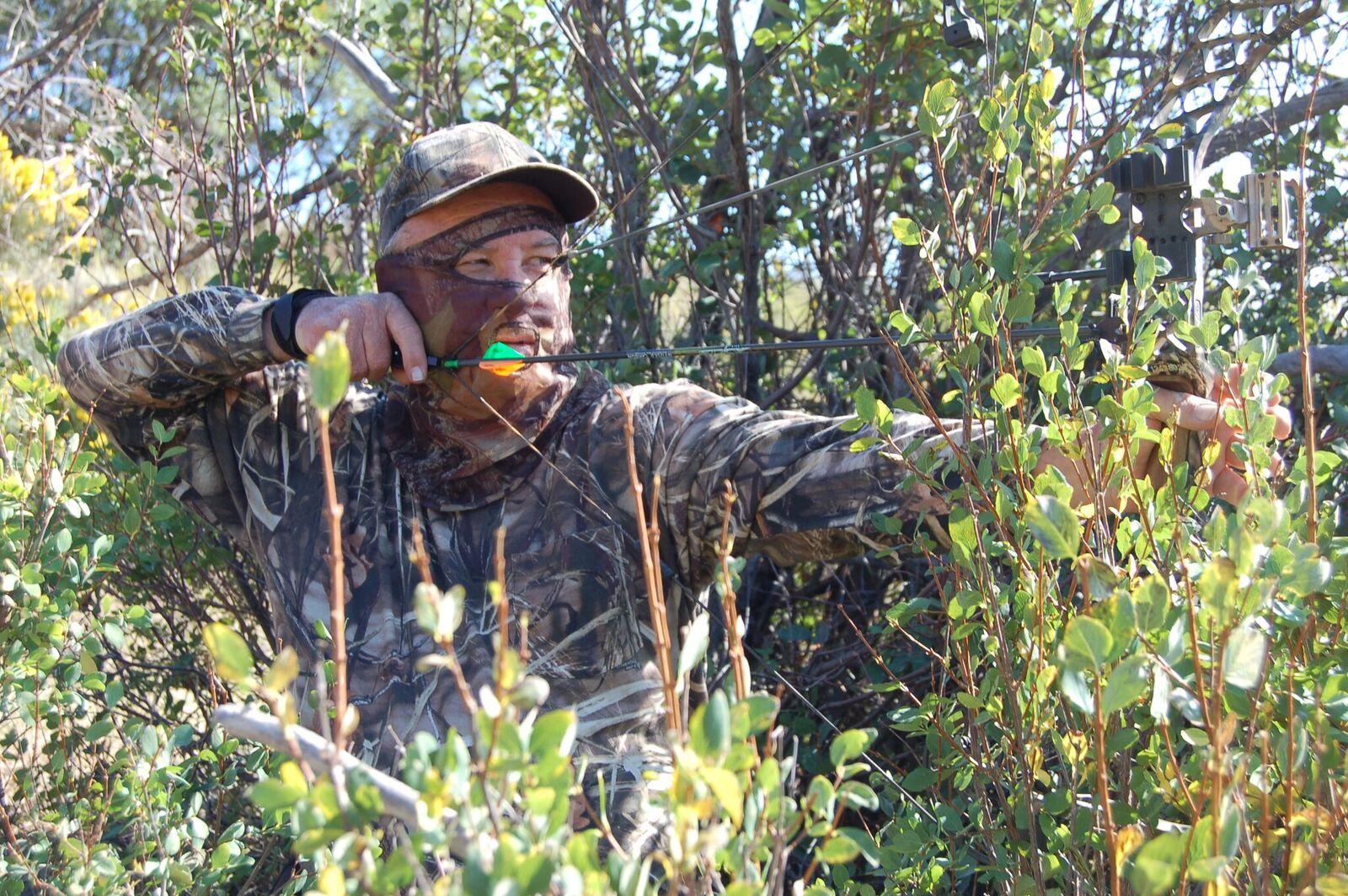 Bowhunter in Camo – Camo from head to toe is the standard dress code for the successful bow hunter.